Adoptees get peek at past in birth records 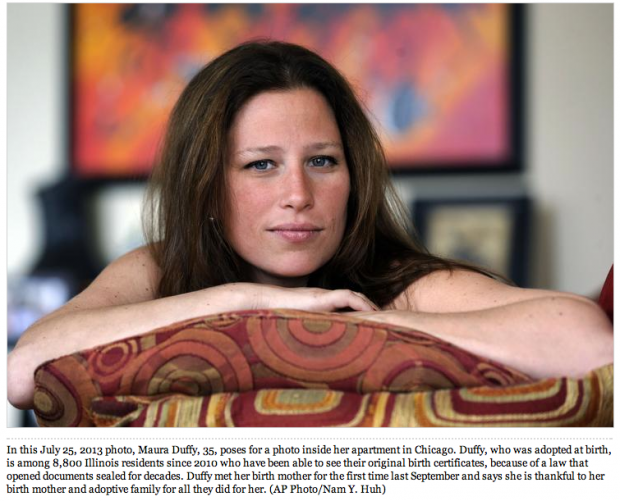 Lately we’ve been hearing more reunion stories of birth parents and adoptees. And often times, social media plays a big role in these reunions. But a change in state legislation has also enabled some adoptees to search more easily as original birth certificates are made available in a handful of states. “Adoptees get peek at past in birth records” by John O’Connor, The Associated Press:

Since a handful of states, including Illinois, have unsealed birth certificates, thousands of adoptees have claimed them and learned about their beginnings. The 35-year-old [Maura] Duffy, adopted at birth, is among 8,800 Illinois residents since 2010 to do so.

Not everyone who gets the document goes on a search. But for many, it’s led to heart-rending reunions.

“I finally got to see and meet someone who looked exactly like me,” said Duffy, a marketing professional. “It’s a very kind of emotional, strange thing that you grow up your whole life and don’t ever know anything about your background. And it’s the first chapter of your life, that birth certificate.”

Obtaining a birth certificate — something most people can do without much thought — often is a visceral, as much as legal, quest for an adoptee.

“The things that people take for granted are enormous, life-changing moments” for adoptees, said Rep. Sara Feigenholtz, a Chicago Democrat and adoptee who sponsored the Illinois law and still breaks down when discussing it.

Feigenholtz, who met her birth mother years ago, worked for more than a decade to open birth certificates in Illinois, which like nearly every other state had sealed such records from the 1940s through the 1980s. There are several reasons adoptees want access to those records, including learning medical histories crucial to determining health risks. Many adoptees believe they have a right to such a personal, intimate record…

Dave Reynolds, a 46-year-old health care-plan operator from Deerfield, didn’t seek his birth record until he met Feigenholtz, who encouraged him. He just spoke by phone about a month ago to his birth mother, who lives in another state and never told anyone in her family about her son.

The meetings can be just as wrenching and emotional for birth mothers, and many adoptees are reluctant to ask them to come forward and speak publicly. Nor is it always an easy process for the family that reared an adopted child…

Duffy’s adoptive mother, who is ill with Alzheimer’s, often talked with her daughter about finding her birth family. The process has been hard on her father, but “I’m not going anywhere,” Duffy said.

“They were the people that put a Band-Aid on my knee when I scraped it. They’re my family,” she said. “It’s just nice to start to get to know this person who gave so much up for me, who did such a selfless thing for me, giving me birth and bringing me into this world.”