The Other Side by Shara Case

"I will never stop supporting or promoting the difficult but beautiful act of adoption. Love IS brave." - Shara, adoptee #BraveLove
Posted by BraveLove on April 29, 2019 | 5 min read 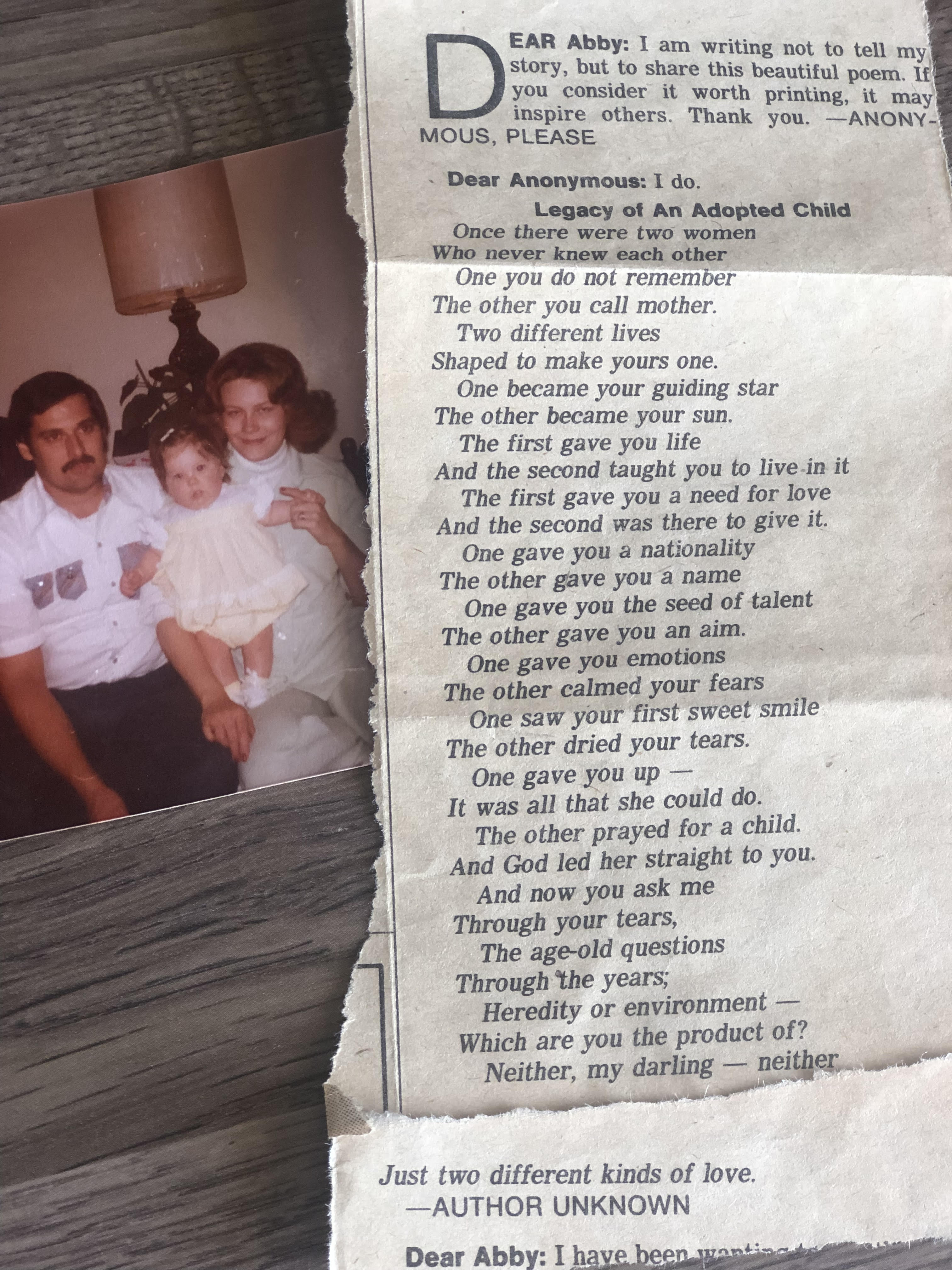 Like a lot of babies adopted in the 1970’s, the details of my beginnings were solely confined to a delicate sheet of paper on which were typed some basic facts about my biological family. “To be given to adoptive parents”, it read at the top.

It informed me that my mother had red hair and my father played guitar. Some rogue nurse penciled in the name my birth mother gave me up top even though such details were not supposed to be given out. I grew up with the knowledge that there was another side to me that I probably would never know. I came from someplace else, from someone else, b
ut the closed nature of adoption back then made it virtually impossible to even wonder about. I loved my family and the life I was given with all my heart.

There’s an unspoken mantra that adopted kids of my generation get stamped on our hearts early and often: be thankful that you were loved and chosen.

There’s nothing wrong with this by the way, it was how we were made to feel special. I was indeed loved and chosen, my story was different than all my friends’ and I embraced it. It’s just that along with all this thankfulness, you learn something quite unintended, and that is never to question or be curious about your past. I actually grew up thinking it was unnatural to wonder about my circumstances. Be grateful and keep on moving.

As the years go on, this of course becomes more difficult. I would think about my biological parents and wonder if they ever thought of me.

Turning forty awakened something inside of me that I did not expect: I wanted to know something, anything, and for the first time, I didn’t feel bad about that. My son said he thought those DNA kits were cool, and that I should try it. While I knew I’d get interesting information out of it, I never thought anyone would actually be out there looking for me. When my husband asked what I would do if I found someone, I brushed off the idea completely because I was convinced nobody would be looking for me. I took the test and waited. One morning, I sleepily opened up the app on my phone, and there it was, a pink dot avatar with the label “parent” next to it. Here was new documentation to stare at that wasn’t decades old. All the closed adoption 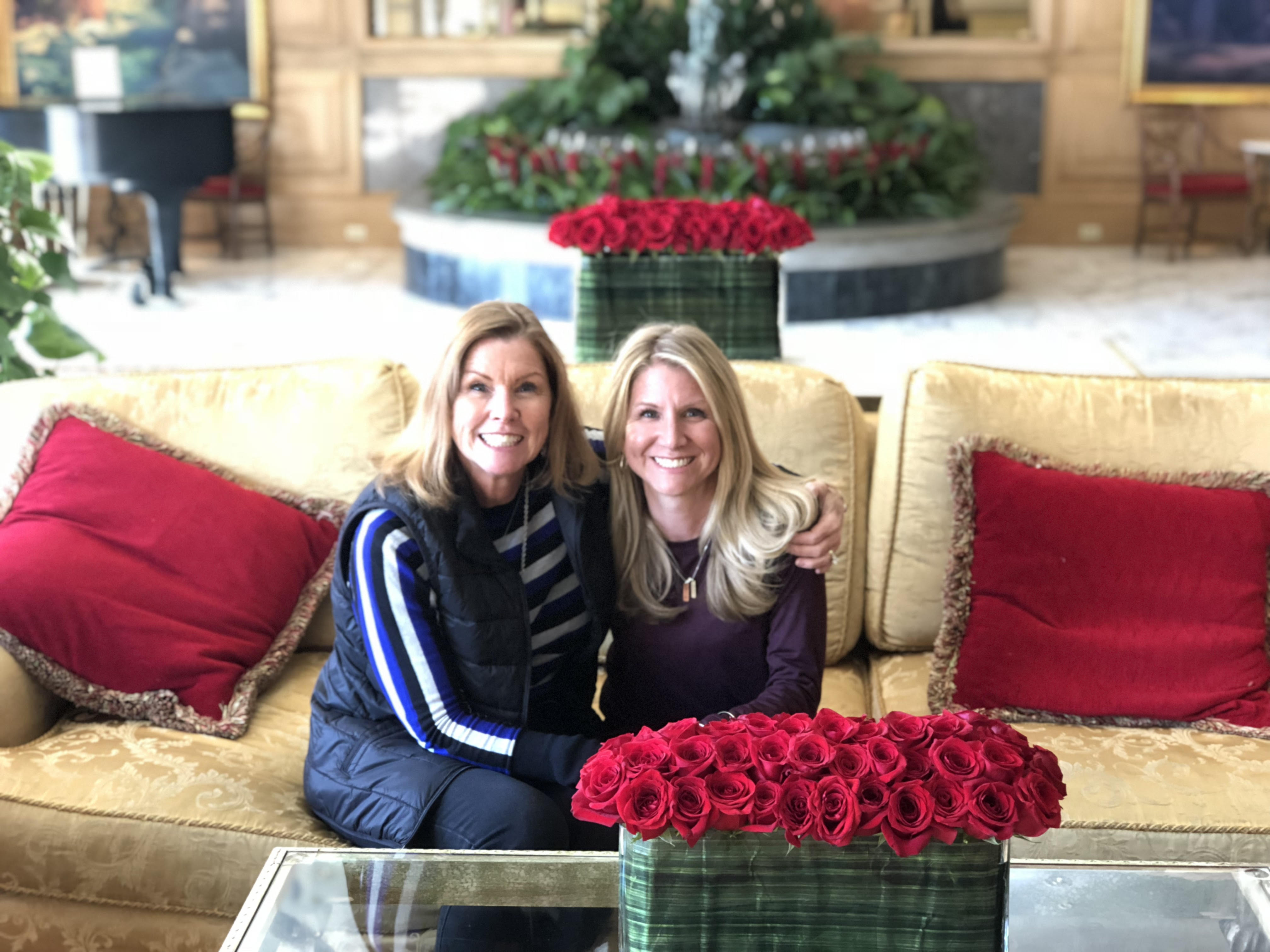 laws in the world couldn’t compete with two ladies spitting in a DNA test tube. My mind literally could not process what I was seeing. She has a name! It's Susan! She has a face! Wow, we really do look alike! I wanted to tell her thank you. I needed her to know that everything she went through meant something. After a few days of staring at the pink dot, I nervously typed out my message.

It took me three more days to hit the send button. I thanked her for what she did, told her everything turned out great, and that I had no expectations.

I was being ridiculously guarded, but I was still convinced she may not want to hear from me. Within minutes, I had a notification of a response. “I’ve been waiting for you,” she responded. Not only had she not forgotten me, she actually wanted to hear from me. After forty years of absolutely nothing, here we were, keyboard chatting trying to figure out our next steps.

There is no road map for properly meeting your biological parent or child after four decades, just strange paradoxes and unfamiliar emotions.

This woman is a total stranger to me but she’s my mother. I don’t have a memory of her at all, but she certainly remembers me. This could be amazing or a complete disaster. In a beautiful twist of fate, it was National Adoption Day the day we first met... something I never knew existed until I read the headline that morning on my way to see her.

I had two charm bracelets made for 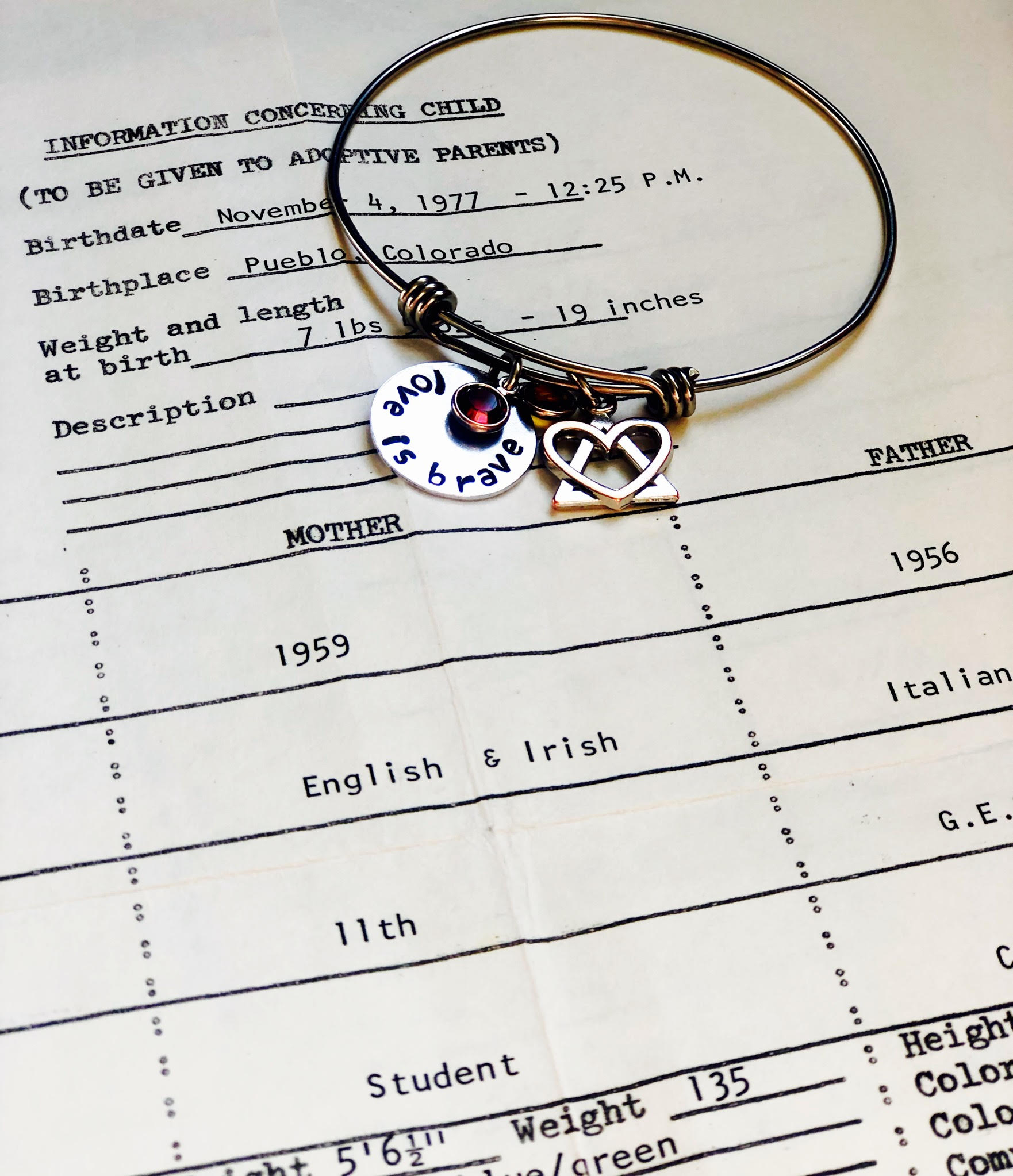 us with our birthstones and a disc that read ‘love is brave.’ I don’t think she ever felt particularly brave or courageous, but I wanted more than anything to let her know she was.

Genetics are a fascinating thing. We sat next to each other chatting and nervously sipping champagne, both of us grabbing for the glass with our left hand... for once not bumping elbows with someone. She filled in the blanks for me that I had always wondered about. Her journey was not an easy one. My father faded out of the picture. Doctors and judges shamed and ridiculed her. The 1970’s were not as breezy or accepting as I thought they were. She selflessly went through it all so that I would have a chance. The empty space in my heart that was always reserved just for her is finally filling back up and healing. I hope I have been able to do the same for her. I still can’t believe I get to know her. Not only do I know her, I really, really like her. We are intimate strangers, working our way out of the ‘stranger’ part more and more each day. I think what makes it work is we both recognize that far from ruining us, adoption saved us. The hard choice was the best choice. I’m so glad that all these years later, she is able to see how her selflessness had such an impact. I finally got to see my other side.

I will never stop supporting or promoting the difficult but beautiful act of adoption. Love IS brave.

Shara grew up in Colorado, an only child in a close knit family of loving parents and grandparents. She is married with two amazing teenage boys. They love taking advantage of the mountains, skiing and hiking when they can. She is a former French teacher and still does a little tutoring. Writing is one of her biggest passions, and she is always on the lookout for new inspiration. You can usually find her on the sidelines of a baseball or lacrosse field cheering on her kids.

Have you been impacted by adoption like Shara?
If so, we want to hear from you.

"I wanted more for her"