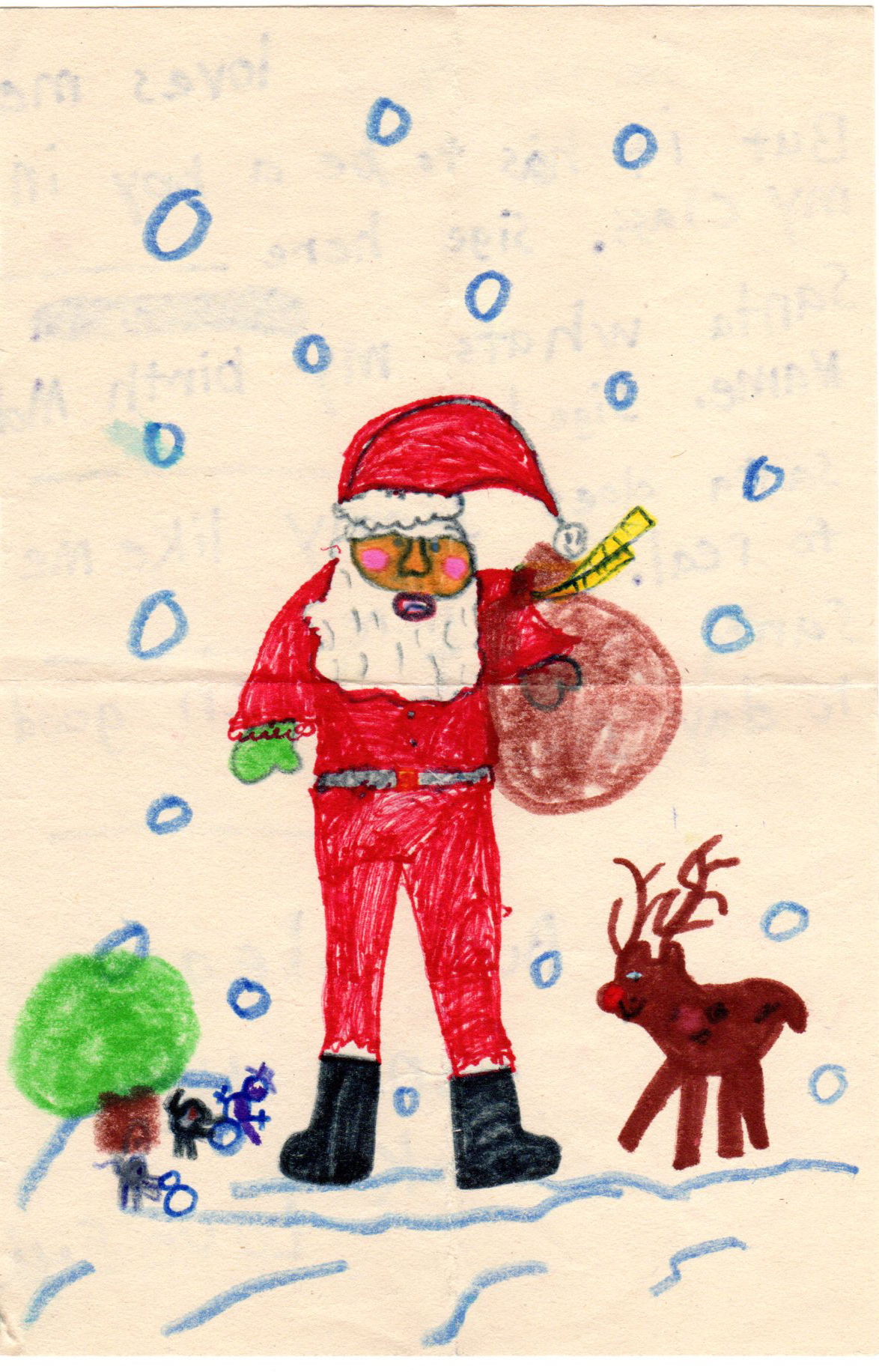 I hate secrets and surprises. I always have. I attribute this to being a curious person, but on an extreme level. And, even that can be attributed, or at least partially due, to growing up never knowing where I came from, but rather where I ended up.

Growing up, I wanted to know who my birth mother was. I wanted to know what she looked like. However, either no one knew who my birth mother was or those that may know couldn’t tell me because it was against the law—such as the attorney that helped my parents adopt me or the doctor who delivered me and who took me home briefly before I was adopted. 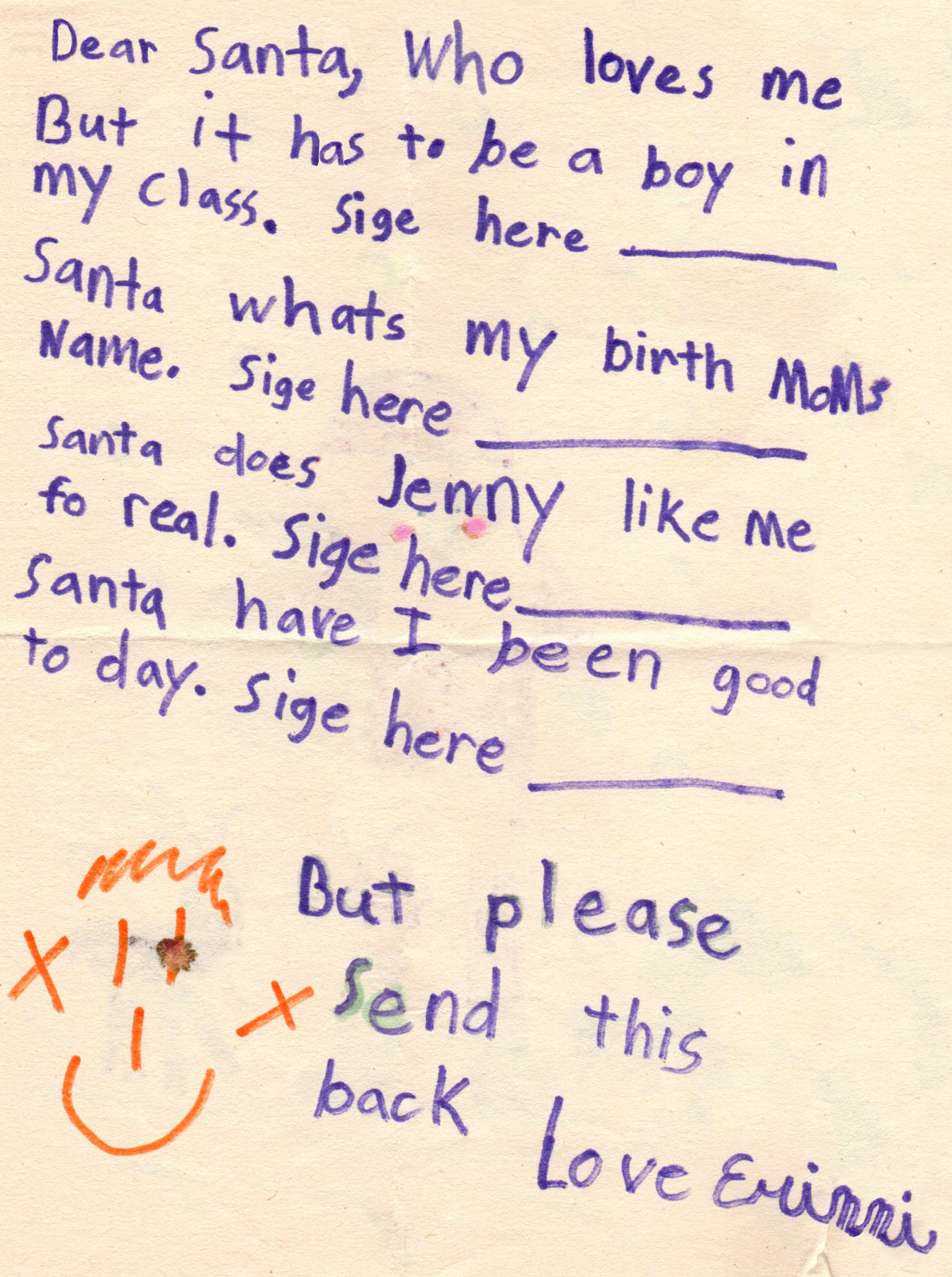 So, what do you do when you can’t find what you seek?

It was when I was in elementary that I had this a-ha moment. I would ask Santa Clause to help me! I started including requests of my birth mother’s name and sometimes a photo of her in my letters to Santa over the next couple of years. However, because I had yet to receive anything from him about her, I was in fourth grade when I tried to be more specific in my request. I asked him for her name along with a “sign here” line. At the bottom of the letter, I added “Please send this back.” Although, Santa could have written me his own letter containing her name, I remember making sure there weren’t any loopholes—that by adding a “sign here” line, it would force him to write her name down for me right then and there and after doing so, he’d immediately send me my own letter back because of the reminder. I definitely wanted more than just her name and picture. I wanted to know her. I wanted to know everything about her. However, as a child, I believed that if I could just have her name and know what she looked like, somehow, I would automatically be able to find her—that it would be that easy.

And it wasn’t about me trying to find “my mom.” I already had a mom and she adopted me and I loved her. I just wanted to know my birth mother because I simply needed to know.

As Christmas was nearing, you can imagine my disappointment when I finally received a letter from Santa that year. It was a very thoughtful letter—although, I can’t recall what it said and at the time it didn’t really matter. In that moment, what did matter, was that I would no longer be expecting the name of my birth mother and certainly not a photo. My heart sank.

It was my mom who wrote me back as “Santa.” And that makes me sad too. As an adult, I’ve wondered if she felt sad or unloved as she read my letters to him. I purposefully mailed that particular letter without my family knowing in order to protect their feelings, but the mailman didn’t take it. The letter continued to sit there in the mailbox. I suppose that’s how my mom found it. I’ve wondered if it hit her hard—out of the blue—because my intense wonderment of my birth mother wasn’t something I talked very much about for fear of making my parents feel sad or making them think I didn’t want them as my parents. In reality, I think the fears of how they might feel came from deep inside myself—my own feelings of sadness; a loss of someone I longed for. And sadness that someone didn’t want me—sadness that maybe that someone didn’t even love me. And the “longing for,” forever pulling at my bones as if her own soul was somehow tied to my very own. I didn’t really understand those feelings that I had at the time. I felt them, but I didn’t really fully understand why. It would be another several more years until I finally did.

My bubble burst with the thought of Santa being the answer to my prayers. That was the last letter I ever wrote to him. The next year, before Christmas, I became traumatized in learning that Santa didn’t even exist. As I went on with life, she—my birth mother—would always come in waves. I would go for a while without thinking of her and being a normal kid in a normal family household. But, when I thought of her—I really thought of her. My mind wondered of her in an extremely driven way. And, I suppose it wasn’t always about her, but rather about me. “Who am I?” Obviously, I had a name, I had parents, I had a brother, and I was on the family tree—but who was I really? Where are my biological connections? I believed that my birth mother held that answer. However, because I didn’t know anything about her, at some point, I began to improvise with what I had—and what I had, was myself. Surely, I resemble her. I would go to my bathroom and stare into the mirror while squinting my eyes just enough to where I am partially blurry to myself. I would stare for a while trying to see if maybe I could somehow make out an older face within my own somewhat blurry face as if it would give me an idea of what she looked like and if I could get that kind of an idea—if I could somehow get that image and remember it, then maybe I would someday spot her in a crowd.

Again, she came in waves and so time went on—I continued going through life. Then, suddenly, there was Oprah! Oprah’s talk show had been around for quite some time, but I was beginning to notice her now that I was a bit older. It shouldn’t come as a shock that I had another ah-ha moment! I wrote to Oprah Winfrey asking that she help me find my birth mother. I was excited. I thought, without a doubt, Oprah would help me because she would be so moved by my letter. Her show was in Chicago too; which I was somewhat close to and so only increased my chances—or so I thought. Plus, my story starts with knowing nothing and so to have Oprah blow it wide open—who wouldn’t want to hear about that—I know I did! Well, no surprise here. I never got to be on Oprah, but to be fair, she probably wouldn’t have been allowed to help me anyway because of my age.

As my wanting to find my birth mother continued on in waves, so did my thoughts of her—especially on my birthday. Once a year, throughout my childhood and adolescents, I wondered if she was thinking of me. As my family would sing “Happy Birthday,” I would have my wish ready to be wished upon those glowing candles on my birthday cake.

I never needed time to think about what I would wish for each year because my wish was the same every year—that I would someday find her.

For the longest time, I was left with only my once-a-year birthday wish, and what Frank Sinatra likes to call, “High apple pie in the sky hopes” that someday I would, indeed, find her. And, after 25 years of my life, that “someday” finally came when she and I sat face to face and the longing for her that pulled at my bones, suddenly replaced by a deep level of peace and a new found love for her—everything was so very bittersweet.

Erinni is originally from out east and currently resides amongst the mountains in the west. She has a great love for learning and problem solving and has many passions. Whether it’s taking on entrepreneurial endeavors, humanitarian efforts, advocating for children’s rights and the welfare of animals, or doing legal research and writing—just to name a few—Erinni’s inner drive keeps her constantly on the go.

Have you been impacted by adoption like Erinni?
If so, we want to hear from you.

"I wanted more for her"