A pro-adoption movement changing the perception of adoption by acknowledging birth moms for their brave decision.

Our mission is to change the perception of adoption through honest, informative, and hopeful communication that conveys the heroism and bravery a birth mother displays when she places her child with a loving family through adoption.

We understand that adoption is not for everyone. Ideally, no one wants to separate mother from child. So often the brave act of placing a baby for adoption is viewed in a negative light, when in reality it is a selfless, difficult, and loving act a birth mother can make for her child. We aim to invite and empower women to consider adoption when faced with an unplanned pregnancy.

We’re not an adoption agency. We’re not a pregnancy resource center or a church ministry. We’re a national, not-for-profit 501(c)(3) public charity organization headquartered in Dallas, Texas that exists to change the perception of adoption through honest, informative, and hopeful communication that conveys the bravery of birth mothers. We believe adoption can be a beautiful thing.

The idea of BraveLove began with a small group of people working directly with a local pregnancy resource center in Dallas. The center witnessed their clients weren’t considering adoption as an option when faced with an unplanned pregnancy. This observation was consistent with the National Council for Adoption’s Fact Book, which says 2% of women faced with an unplanned pregnancy choose adoption. The brave act of placing a baby for adoption is often viewed in a negative light, when in reality it is a selfless, difficult, and loving decision a woman can make for her child.

BraveLove’s Board of Directors evolved from that original group and is currently comprised of men and women from across Texas. Board Directors range from a birth mother, adoptive parents, business consultants, financial analysts, attorneys, ministers, to philanthropists who are working hard to use their talents to impact the culture’s perception of adoption.

BraveLove is here to change the way our culture thinks about adoption so that it’s recognized as a viable and more explored path for women in unplanned pregnancies. Through the creation and distribution of media and messaging, BraveLove aims to erase any shame surrounding adoption and instead show how adoption can be an amazing act of love and bravery.

Still have questions about what we do? We'll answer them here.

Show the world how brave and beautiful adoption can be. 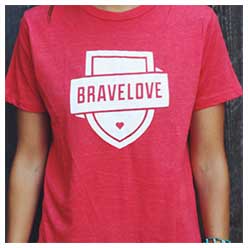