Sara | An Adoptive Mom from Texas 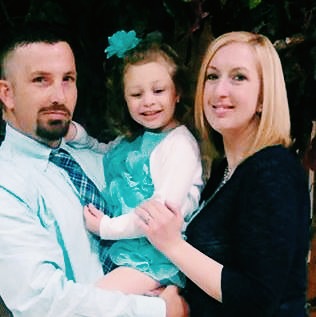 As a child did you ever dream that you would one day adopt?

As a child I would have never dreamed I would adopt, but after several years of marriage, it became very apparent that God had built us for just that. Jason, my husband, had two cousins who were adopted and was even adopted himself by his dad. He grew up around a family that believed blood had nothing to do with being family. Six years into our marriage, we spent a year and a half taking care of my cousin's two girls. When they were reunited with their parents, and we were without children again, we knew it didn't matter how we became parents. However, it took a fertility specialist telling us there were no foreseen options for us to get pregnant before we finally started our adoption journey.

Why did we choose it? Well I think it chose us. Even though adoption was never something we didn't want, we didn't feel it was something we could or should do, financially speaking, unless I could not get pregnant. In some ways I'm glad I could not. I could not imagine my life without my daughter of course, but also her birth mom. Everything about our process was a God send.

Well, the first adopted family we met with to decide this question for ourselves did an international adoption. We left their house knowing it was not for us. Both Jason's family and mine are very big into family heritage. I can remember my parents driving past the house we lived in when I was born to show me. We knew we wanted to be able to do things like that without passports. When it came to opened or closed, Jason was sure he could not handle open. The fear of losing our baby like you see on Lifetime Movies was something he could not deal with. He wanted our birth mom to be as far away as possible. When we received the call from a friend about her niece looking for a family willing to do an open adoption I expected Jason to say no right away. Instead, God opened his heart to the possibility of being able to trust this stranger. I'm so glad He did. I could not imagine our life without her, or the family she provided for us.

Describe the rewards and challenges of your type of adoption.

I will never forget the looks on friend's faces when they heard the words "open adoption". They knew that we were having to put all our trust in one girls decision. I suppose it was nerve racking at times, but with our open adoption I was at every doctors appointment. Appointments were on Wednesday and our birth mom came to church with us afterwards. Our whole family and church home welcomed her with open arms. She was a part of our lives and we were part of hers. It took a lot of the fear away. I was getting the chance to see every part of her pregnancy. I was having my cake and eating it too. The difficult part of open adoption did not happen for me until after she was born. Our birth mom involved me so much in the pregnancy that I felt like I really was pregnant. When my baby was here and I'd hear people talk about how much she looked like her birth family, it was a shock to my hormones. I was not prepared for the emotional turmoil I would go through. I felt guilty for any pain our birth mom was going through, and angry for any physical/biological difference my sweet girl had with us. I later described these feelings as adoptive mom postpartum. Talking with our birth mom about these things helped me get past it. I found out things I had a hard time with, she was struggling with as well. We learned to defend each other instead of ourselves. I could not imagine our adoption being closed and not having her to help me through it.

I'm sure you've heard the myths about adoption, adopted children and birth mothers. So if you could dispel one of them – what would you say?

Adoptions is very expensive and you need to be extremely wealthy to be able to adopt. Every adoption is different and so are the fees. There are even organizations willing to help you raise the money or pay the fees for you.

What's been the most surprising experience in your adoption?

I think the most surprising moment in our adoption was seeing our daughter being born. When we started this process, I never dreamed that could even be an option.

What is your greatest wish for adoptive parents today?

That they are informed about all the different types of adoption opportunities in their area. There are so many, and most are overlooked.

If you could tell your child's birth mother one thing, what would it be?

I talk to our birth mom almost every day. I'm so proud of her. She has come so far in the last 3+ years. She has not taken her unplanned pregnancy lightly, and takes every opportunity to help others in similar situations. She is brave and strong willed, and I am proud to be a part of her life.

What excited you about BraveLove?

The opportunity to help others going through the struggles we went through.